No matter how insignificant we may feel, when we determine to proclaim Jesus, we make a difference.

Edward Kimball was a Sunday School teacher in Detroit in the 1850’s. When a young visitor told Kimball that he had no interest in knowing Jesus, he could not let it go. Kimball went to his workplace, purchased a shoe shine, and began to witness to him. Before he left, D.L. Moody received Jesus as his Savior.

Moody became a powerful evangelist who reached more than one hundred million people with the Gospel. Frederick Meyer’s congregation heard about the American revival and invited Moody to London. He preached three sermons, every one entitled, “Jesus, Jesus, Jesus.” Revival swept through the church, and Meyer’s ministry was transformed.

J. Wilbur Chapman came to Christ in Meyer’s church and eventually moved to Chicago where he led Billy Sunday to salvation. Sunday became a great preacher, and Mordecai Ham was saved at one of his meetings.

Ham went on to become one of the first tent revivalists. One night in North Carolina, under Ham’s large circus tent where people stood shoulder to shoulder, a young man came to check out the spectacle. That night in 1936, Billy Graham came to know Jesus.

Because one seemingly insignificant Sunday School teacher was serious about winning the lost, generations of people around the globe were impacted by Christ. What you do for Jesus matters. Go and tell! Win the lost!

May the Lord bless you and keep you. May the Lord make His face to shine upon you and be gracious unto you and give you His peace. May you commit to be salt and light, to proclaim Jesus at every turn. And may you stand amazed at the difference He makes through you! 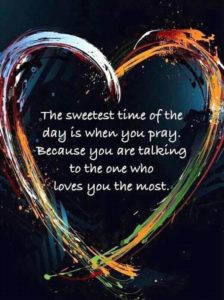